Torchlight 2 is an action RPG set in a fantasy world where the evil power of ‘Ordark’ has been stolen and is causing devastation across the land – it is the player’s role to find the culprit and prevent any further damage. The game consists of 3 acts: Wake of the Alchemist, The Eve of War and After the Alchemist., within which players will have to complete several missions with set objectives in order to progress through the game.

Following the game’s release on 20th September 2012, Torchlight 2 proved extremely popular amongst players and sold over 2 million copies in its first year of release. It has also received strong ratings from fans with a score of 81% on Metacritic and 9/10 on Steam.

Your game saves are one of the most important files relating to Torchlight 2. If you lose them, you will also lose your progress. For this reason, many players choose to create backups that they can return to if they are ever corrupted or have an issue with their PC. Keeping backups also means you'll be able to return to your old saves, should you ever wish to revisit past progress.

But that's enough about why your Torchlight II saves are important, find out where they're located for your operating system below.

On Windows, your Torchlight 2 save files can be found in this folder:

To access that path, just hit WINDOWS + R on your keyboard, or right click the start menu button and select Run, to open a Run window. In the Run window, paste the above path into the text field like so and hit OK: 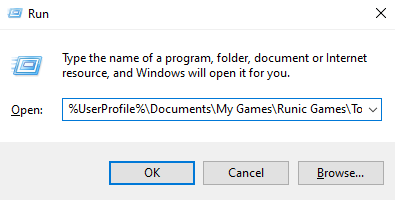 And that'll be you in your saves folder!

Mac installations of Torchlight II stored their game save files in this directory:

To go to that path:

Torchlight 2 on Linux puts game save files in this path: